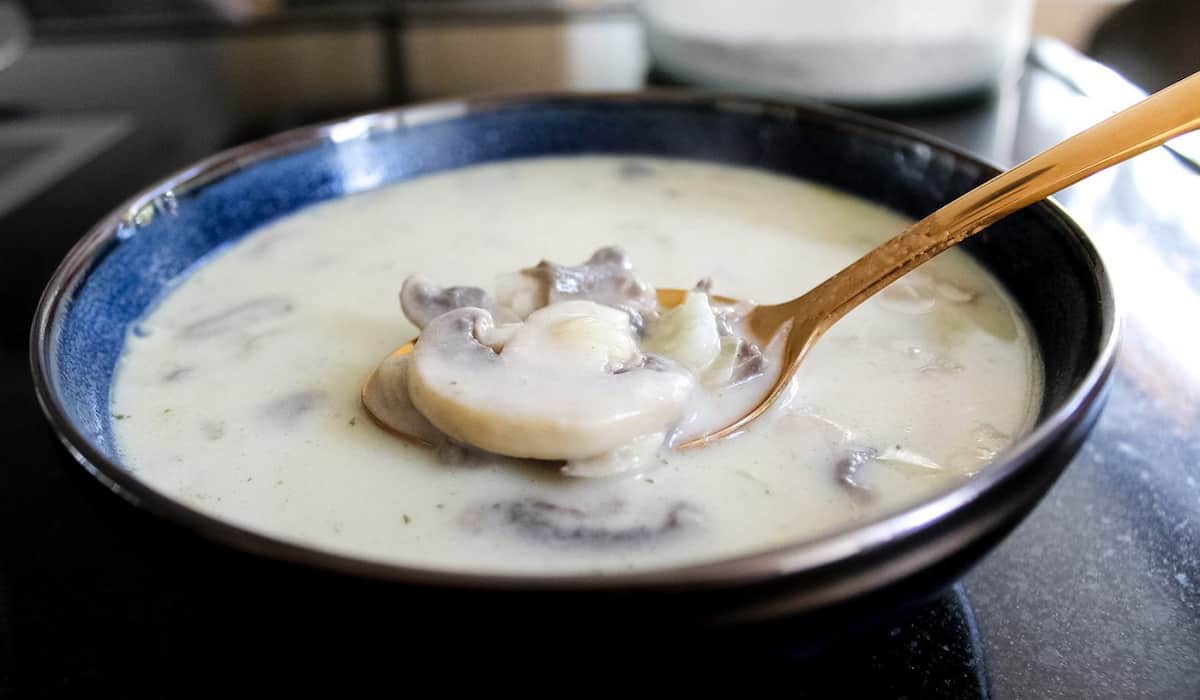 Vegan cream of mushroom soup is one of those comforting cream of mushroom recipes that you can make any time. You can have it for lunch, dinner or breakfast on any day. This recipe is so easy and creates such a delicious mushroom soup that you’ll be left in awe. It is dairy-free but still tastes rich, smooth, and creamy. It is savory, creamy and chunks of mushrooms that just burst with flavor in your mouth.

You can enjoy it in a casserole bowl with a slice of fresh bread, garlic naan, or salad.

The ingredients of any recipe are the most important, therefore using the freshest ingredients you can find will make your recipe ultimately delicious. So, select the finest cream of mushroom soup ingredients that you can get your hand on.

To make vegan cream of mushroom soup, follow this easy recipe that also gives you pro-tips and substitute ideas too. 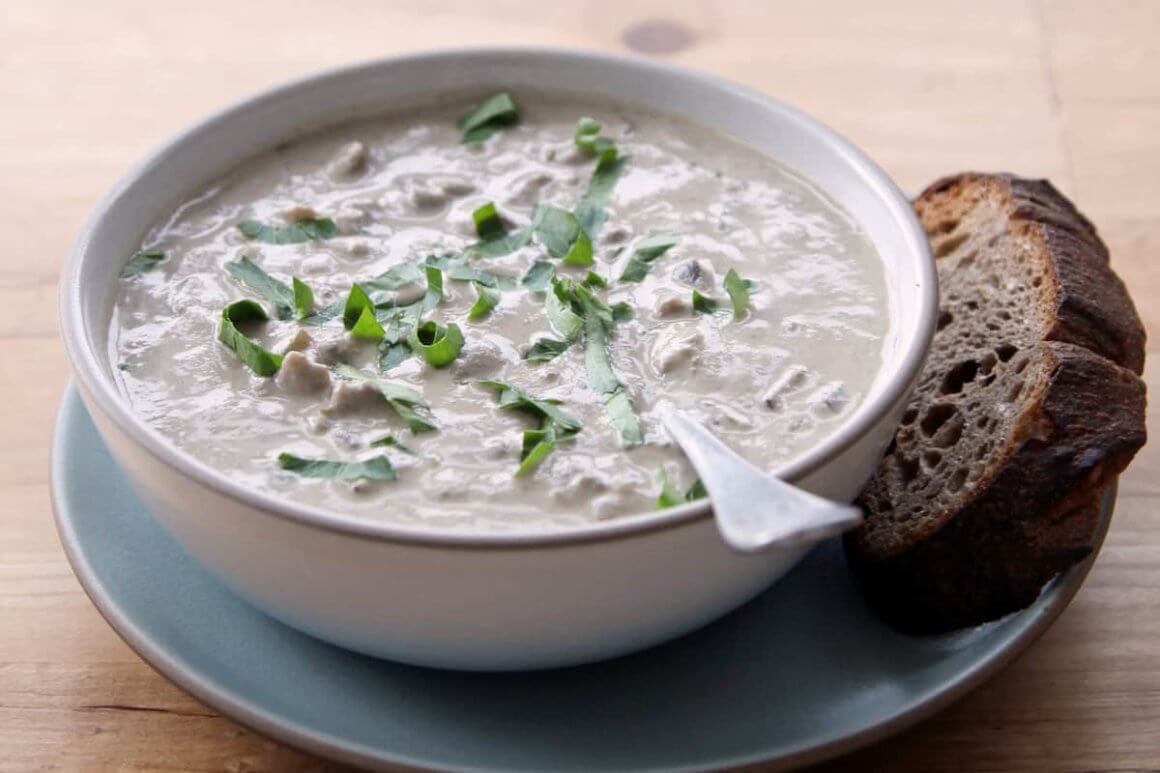 So, before we dive into how you can prepare the delicious vegan soup at home, here is what else you can do if you don’t have the right ingredients on hand.

When your pantry is bare and you cannot make cream of mushroom soup, here is a list of substitutes that you can make easily if you have the following ingredients. Just like vegan mushroom soup, these recipes can work wonders.

Alfredo sauce is the best alternative to vegan cream of mushroom soup if you are making a casserole. It is heavy, creamy and the consistency is very similar. The homemade alternative can be alfredo sauce with some sautéed mushrooms and fresh garlic. 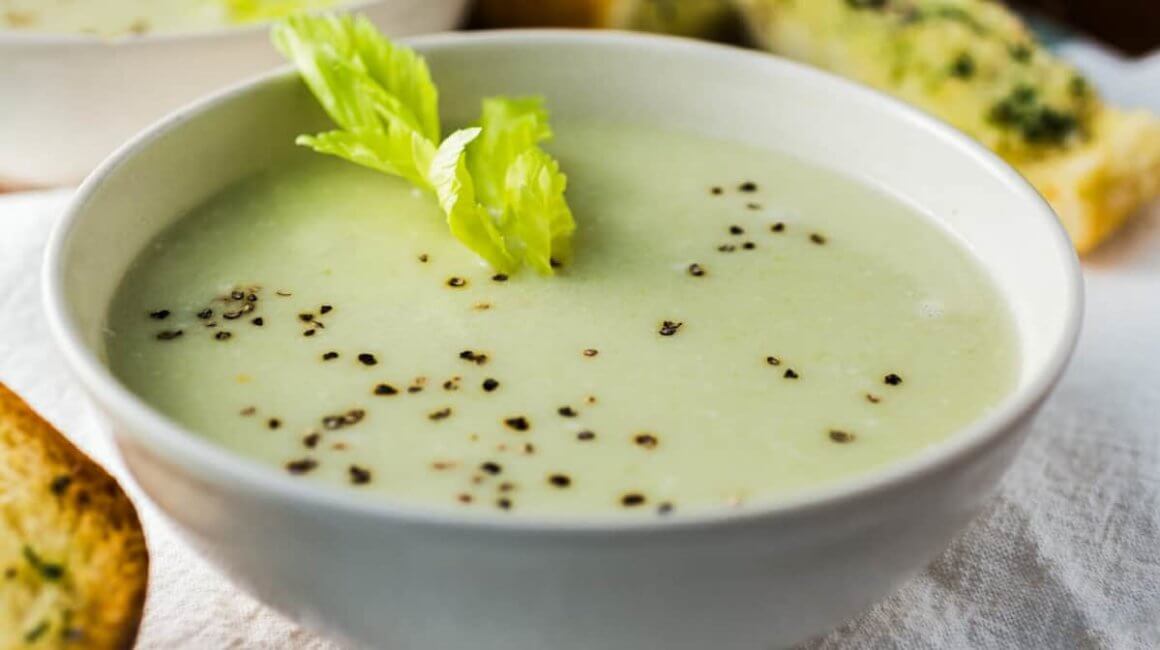 Sour cream can lift the taste of almost everything. Whether it’s cake or muffins, cheese dip or soups. The sour cream has a very thick and smooth consistency. If you don’t have vegan mushroom soup and no ingredients to make it either, you can switch to sour cream. Just add some chopped mushrooms and you’re good to go.

All of these substitutes work in a pinch but if you are willing to invest some time and energy in making homemade vegan cream of mushroom soup, here is a recipe that is a lot easier than you think.

You can also modify this recipe to create something unique and delicious with your own additions. Here are some frequently asked questions related to vegan cream of mushroom soup that you should read to get all your queries answered.

Should You Use Canned Mushroom Soup? 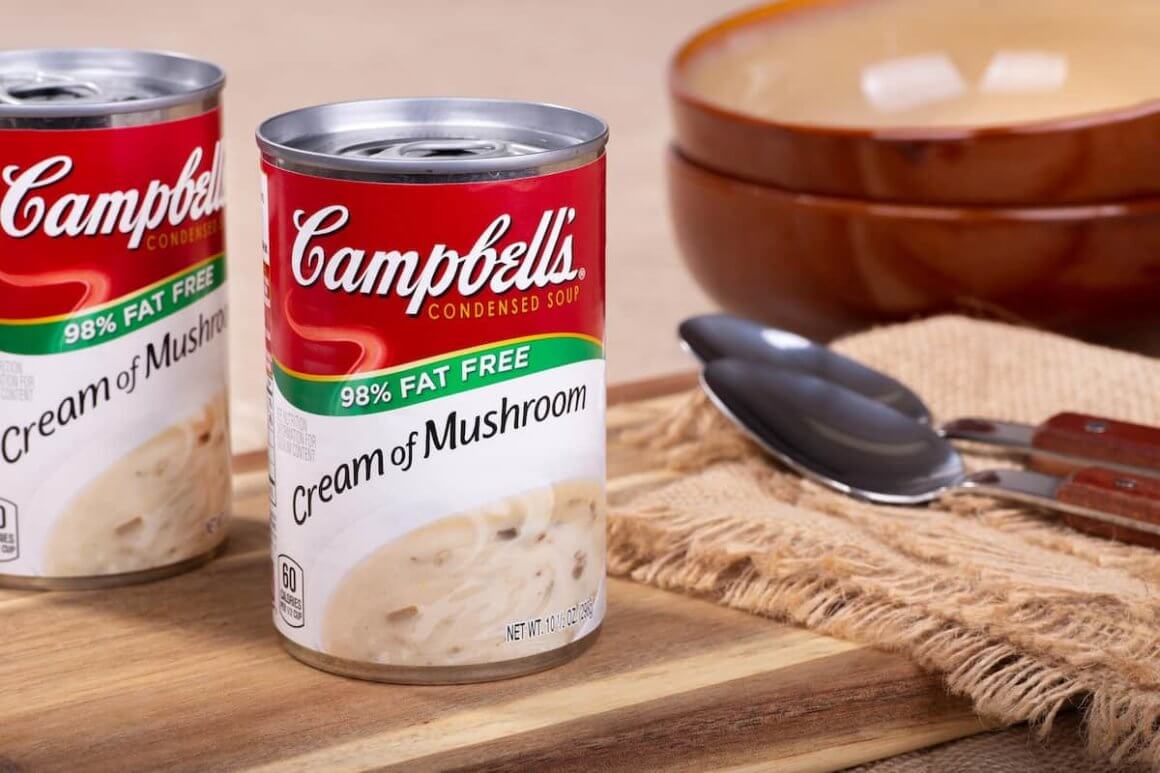 Canned vegan mushroom soup is not a good choice because it is not as healthy as homemade mushroom soup. These canned mushroom soups are loaded with sodium and most ingredients are unhealthy.

You’ll find just a tiny amount of chicken or mushroom in them and lots of salt. The ones you order at a restaurant, on the other hand, are a condensed soup, ready to eat. They are made with salted butter, heavy cream, and fresh mushrooms that taste much better.

Mushroom soup made with fine cream of mushroom soup ingredients can make the soup refreshing and taste flavorful. This healthy mushroom soup recipe can delight your taste buds and is equally loved by all family members and guests of all ages.

When To Eat Mushroom Soup?

Is This A Vegan Cream Of Mushroom Soup Recipe?

Can I Use This Vegan Cream Of Mushroom Soup For Other Recipes?

This soup works wonders for recipes such as green bean casserole and beef stroganoff. You can use this recipe to prepare your own cream of mushroom soup from scratch and swap it with the canned version. Your dishes will come out even more delicious.

The mushroom soup is simply amazing because it is thick, creamy, flavorful, and fulfilling. You’ll fall in love with the taste and a big bowl of it for lunch or dinner can satisfy your appetite. A perfect comforting and cozy soup when you don’t want to waste too much time in the kitchen.

What Should I Serve With A Healthy Mushroom Soup Recipe?

There are plenty of foods you can serve with a bowl of homemade mushroom soup. You can serve a garlic naan, dinner roll, or a slice of bread. But if you are looking for gluten-free options, you can serve it with a homemade salad, oatmeal crackers, or vegan biscuits. You can also add some pasta, or quinoa to make this healthy mushroom soup recipe, fulfilling and thick.

Which Mushrooms Should Work Best With This Recipe? 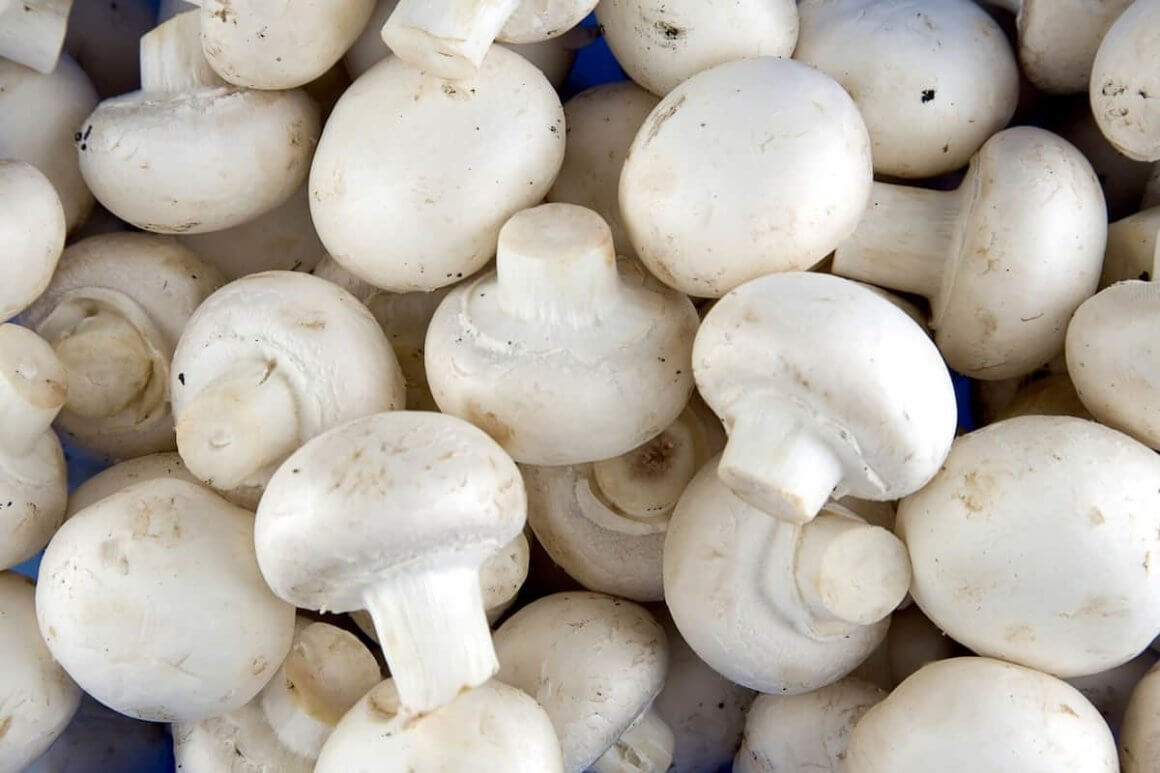 Although you can use any mushrooms for this recipe, as they all will turn out great. Most cream of mushroom soup recipes uses button mushrooms. Button mushrooms have a good taste and texture. You can also find them at any grocery shop easily.

If you don’t like button mushrooms, you can use Portobello mushrooms also known as baby Portobello. They have a dark color but they add a delicious flavor to the vegan cream of mushroom soup.

Which Dairy-Free Milk Should Be Used For This Recipe?

Any unsweetened milk should be fine. However, coconut milk has a rich texture and a very neutral taste, which goes with the recipe. If you don’t have coconut milk, Soy milk, oat milk, flax milk, rice milk, or any other milk can also do a wonderful job.

Can Leftover Mushroom Soup Be Frozen?

Yes, the homemade mushroom soup can be frozen easily in an air-tight container. However, its taste may change slightly when thawed as it no longer remains fresh. Heating it may also cause some separation, so it is suggested to stir the mushroom soup well when you reheat it.

How Does Mushroom Soup Thicken Without Cream?

The original and customary vegan cream of mushroom soup uses heavy cream. But coconut milk or any other milk can give a similar consistency when thickened with flour or cornstarch.

How Long Does It Take To Cook Cream Of Mushroom Recipes?

This recipe takes about 35-40 minutes.

Is The Vegan Cream Of Mushroom Soup High In calories?

The serving is very satisfying and one serving of mushroom soup made according to a healthy mushroom soup recipe, contains around 319 kcal which is fairly low than a typical lunch or dinner that is around 500kcal. 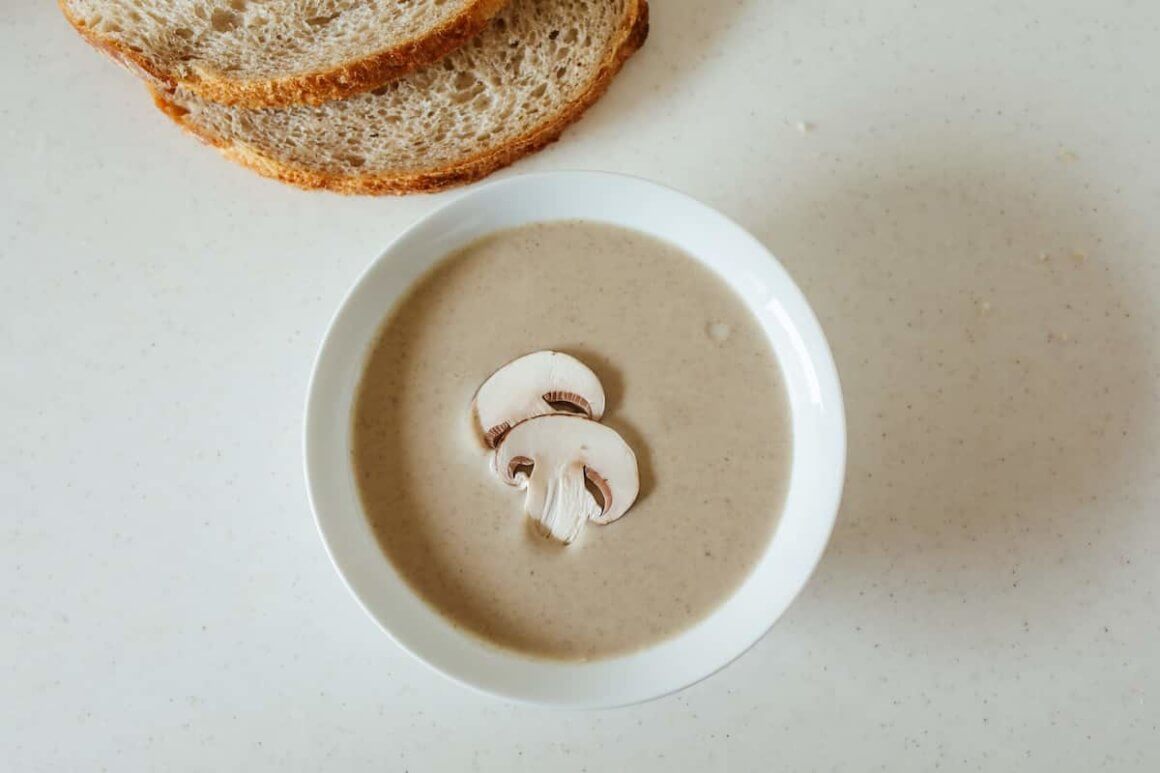 A handful of ingredients are needed to make the yummy vegan soup. Here are all the ingredients you need to make yourself a big bowl of mushroom soup.

The taste of the mushroom is the most important component in giving vegan mushroom soup, an amazing flavor. Cremini mushrooms, button mushrooms, and Portobello mushrooms taste great with this recipe. You can also use other mushroom varieties.

Numerous herbs can complement the taste of the mushroom soup. Thyme, parsley, rosemary, oregano, chives, and cilantro can taste great. But you can use whatever herbs you like.

Flour can make or break the homemade cream of mushroom soup recipe therefore, you need to be careful with this ingredient. Flour added slowly mixed in water to the boiling soup can slowly thicken the soup. If you like, you can also switch to cornflour in this recipe. Mix about 2-3 tablespoons cornstarch in 1/4 cup of water and add slowly while stirring the soup constantly. If the soup is not thick enough, you can add some more until the desired texture is achieved. 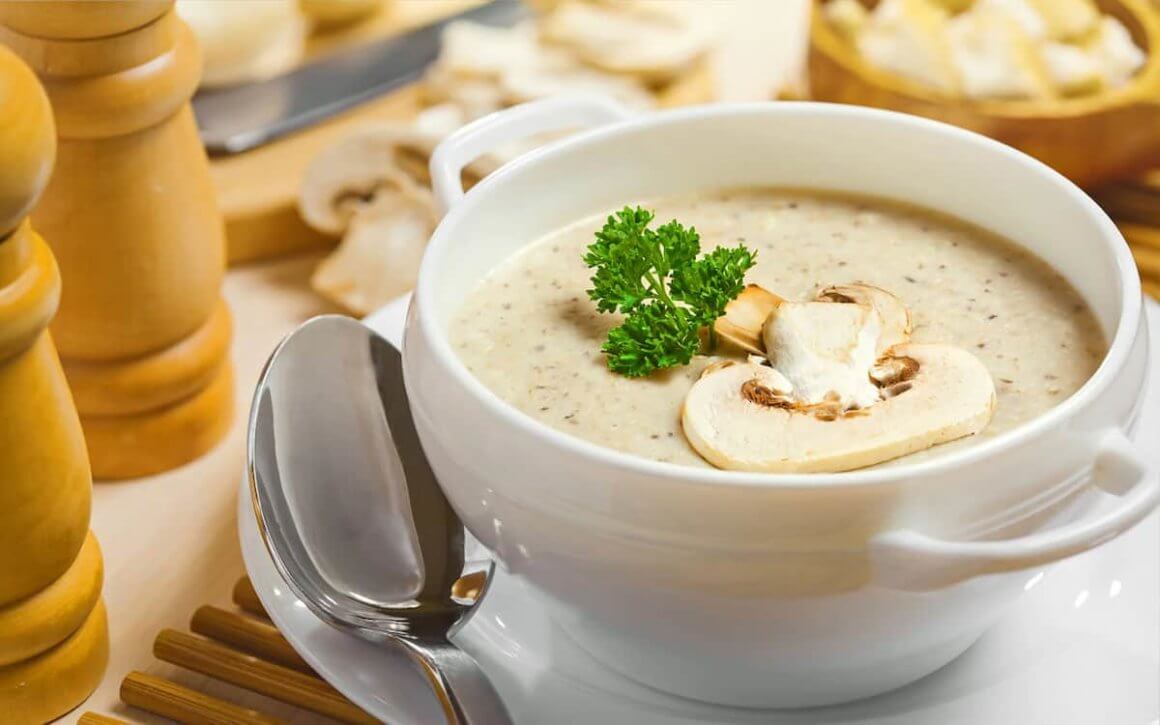 Take a large soup pot and warm up some oil and add diced onions and garlic to it. Then add the vegan buttery spread and cook until the onions are soft and translucent. They require about 5-7 minutes to turn translucent.

Then add the mushrooms and cook until the mushrooms are cooked and have brown sides. Stir in the spices, non-dairy milk, and white wine. Bring the mixture to a boil, and let it cook for 15 minutes. Add the full-fat coconut milk and simmer for another minute then remove from heat.

When the soup slightly cools down, use a hand blender to blend it. You can leave some chunks or blend everything depending on how you like.

When the soup is well-blended, put it back on the burner and lower the heat. Whisk some cornflour in water and slowly add it to the pan while stirring the soup constantly. Let it simmer for a few seconds and check the consistency. If it’s thin, whisk some more cornflour in a bowl with water and add to the pot. Cook for 3-5 minutes and the soup is ready. Pour it into bowls, garnish with herbs, some salt, and black pepper. 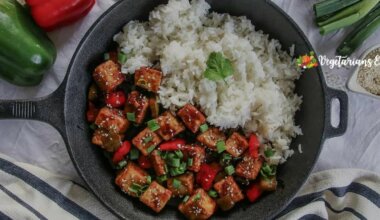 Read More
Table of Contents Questions And Answers Regarding About The Query “Is Tofu Gluten Free”What Is Gluten?Is Tofu Gluten…
Go to mobile version